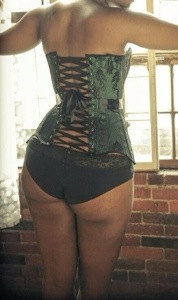 Her long legs pumped hard as she raced through the darkened woods. She barely felt the burn in her thighs and calves, her mind so intent upon making it to safety.

The heavy thud of feet trailed her, growing louder even as she put more speed behind her steps.

A cave was ahead. She could see the runes glowing bright, beacons of protection.

She felt it’s breath on her neck mere seconds before it pushed her to the ground. The air whooshed from her lungs as she fell flat on her face. She was dazed, but managed to scramble to her feet again.

It was still behind her, toying with her now. Close enough to scratch at her legs, but not pull her down.

If she could just make it.

A few steps more. She could hear the hum of the spells. A little more, a few more steps…

It pounced then, bringing her to the ground once more. This time it landed on top of her, its heavy weight pressing her into rotting flora. It buried its muzzle in her neck, snuffling her face and hair. She felt its hot breath.

It – his – voice was so deep it rubbed like gravel over her nerves. His tongue lolled out to lick at her neck as clawed fingers raked down her sides. She stared ahead as the sound of her dress ripping filled the air. He’d reduced it to rags, moving it up so his whole body pressed into her back. He was as bare as she, soft fur to naked skin, cock flush to her bottom

The rough scrape of his palm down her stomach as he reach beneath her to palm between her thighs made her squirm. He lifted her hips from below and rubbed her clit with careful fingers. He knew exactly how to touch her, drawing her arousal to the surface with practiced ease.

“Please.” This time her plea was choked, the press of his fingers making her quiver.

He rose behind her with a growl, squeezing her legs together with his so he could push into the space created by her thighs. Fear and arousal peaked as he thrust his cock, butting along her opening and clit. He gathered her hair with his other hand, pulling her head back so she looked up toward the sky.

“The beast caught a beauty out in the night.” He leaned in so she could see his elongated muzzle and furred face. “Should I eat her or fuck her?”

His cock bumped along her clit again and she gave a shuddery moan. She gazed at him from upside down, aware of the hunger in his very human eyes.

She knew he’d made a choice by the tongue-lolling grin on his face and the way his cock caught at the opening of her cunt on the next pass. He pulled her hips back further, taking her hair more firmly in his hands so her back was bent in a perfect C.

When he thrust hard into her, uncaring of how he fit her body, her fingers dig deep into the soft earth beneath her. It was tight, painfully so even with her wetness.

This time he howled as he seated himself deep. The timbre of it rattled her bones, sending a jolt to her clit.

“Just for me,” he growled out as he withdrew and then forced himself forward again. “Tight and wet just for me.”

He stopped talking, his groans and growls more animalistic as he fucked her open body. She responded to his roughness. It became more difficult to keep silent, the rub of his cock in her deepest places pushing cries from her lips.

She stared up at the full moon, her watery eyes blurring out the brightness of it. Her body squeezed down on his the closer she drew to her climax, his thrusts hard and determined. This wasn’t about savagery, this was about violent satisfaction. He’d make them both come under the bright moon as was his right.

Her cries could have been mistaken for howls as her body spasmed around him. He growled and groaned and fucked her through it.

The words were barely coherent, and anything else he would’ve said was lost in his roars as he came in huge spurts. It was too warm, almost hot. She dropped down to her elbows, panting and shivering as his spunk overflowed. He continued pumping, almost purring as it ran down her inner thighs to wet the ground under them.

She lowered her forehead to the ground, cold and uncaring about the dirt. The shivers wouldn’t stop and she was beyond exhausted.

His cock was still semi-hard and for a moment she thought he’d keep pumping. He pulled out instead, holding her hips steady. She felt his breath on her thighs and cunt, and then the long raspy lick of his tongue as he tasted their combined juices. He licked her clean, his growl of pleasure making her shiver harder.

Her heart slowed, the night now filled with the sounds of their breathing.

“Go in the house, wife.” His voice was hard. “Do not leave again this night or I will tie you to the tree for others to use.”

The pulse of her cunt gave away her desire, but she nodded her ascent.

He clapped a palm to her achy cunt, spurring her into motion. She rose to her feet, moving forward to the protection of the cave without looking back.

She walked through the shields before looking over her shoulder. He was otherworldly standing there. Crouched down, his big body seemed to grow larger in the moonlight. His hard eyes caressed every inch of her naked body, that hunger never once dimming.

“Will you return by morning, husband?” She let the question float on the night air knowing he could hear her clearly.

He gave her a sharp-toothed smile before disappearing back into the woods.