A sacrifice of blood 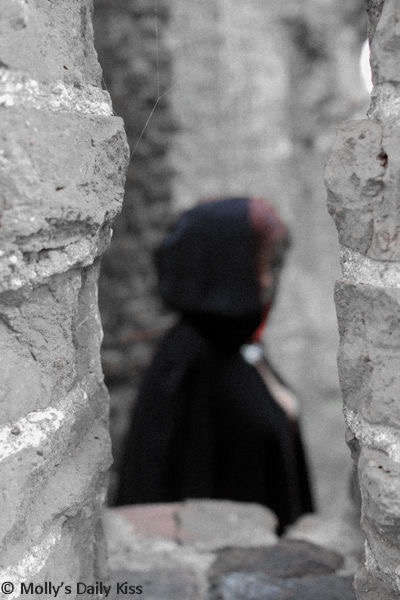 Sara followed her older sister, Tirah, believing she was simply going to see Tirah being stupid on Halloween with her friends. Maybe she’d go back and tell Mom what she saw, maybe she’d join in on the fun. Sara followed eagerly until they approached a place she’d never seen.

It was a maze of stone walls that rose high into the sky. She lost Tirah in the winding way, the night growing oppressively dark the deeper she went in the labyrinth. It was the chant of voices and the swish of fabric that drew her on.

She stopped before the end, peering through an opening to see a large fire blazing. Hooded bodies made a semi circle around fire as a large figure stood staring into the flames. They chanted, first low and then louder, their unrecognizable words doing something odd to Sara. Her vision blurred, graying around the edges to reveal ghouls and devils frolicking amongst group.

Her heart started to race as the ghouls, all hideous, danced closer and closer to where she crouched. Fear sent goosebumps down her skin and a sheen of sweat painted her brow. For a moment, she felt like she was detaching from her body.

The large figure’s voice boomed across the space, pulling her back into herself. She started to duck out of sight, but something seized hold of her limbs and drew her from her hiding place to stand before the fire.

A hand touched her shoulder, rooting her to the ground. Glowing eyes peered from beneath the hood, sending a feathery feeling that started in her core and shoot out to her limbs. Sara felt hot and shivery all over.

“I offer this sacrifice to you, Father Luke, as a sign of my commitment to the order.”

Tirah’s voice floated to her on the air, but she couldn’t move to see her. Sacrifice? The very word caused her heart to spasm.

“I will determine the worthiness of this…” he paused, the hand at her shoulder reaching up to caress her cheek. “Gift.”

Her vision blurred at his touch, then faded. When it returned, she was lying naked on a bed staring up into the hungry eyes of a man. She still felt feverish and antsy, the feeling having intensified as he held her gaze. The urge to undulate, to rub herself against this man was so strong she let out a desperate moan. Oh, God, she needed him to fuck her before she burned up from the inside out.

“Please.” She pressed her thighs together to ease the ache that only grew worse.

He smiled down at her, his handsome face flickering before her eyes. His shifting features revealed something hideous that she was too needy to understand.

“And will you give yourself to me, Sara?” He wrapped a hand around her throat as his knee pressed her knees apart. “Will you be my sacrifice?”

That word made her body flair to life. She wanted to writhe as the need rose higher.

He swallowed up her words with a kiss that burned. It was all teeth and tongue and fire that filled her mouth and sank down her throat. She felt ravenous, that need to be fucked a drumbeat between her thighs.

She felt him pressing against her, demanding entry into her body. The head of his cock slid over her clit and she nearly came from that sensation alone.

“Sara.” He whispered her name into her mouth. “Watch as I take you.”

When had she closed her eyes? She opened them to find those hungry eyes, but a face warped into something awful. His teeth had elongated to points, the skin around his cheeks had melted away to nearly the bone, and blackness oozed from his mouth.

She was paralyzed. Held captive by terror and the fiery ache that still consumed her. There was no inching away from him, and she could only gasp in frantic breaths beneath him.

His demand drew her eyes down the length of their bodies. His cock was a thick dagger between her thighs, set to impale and rip her to shreds.

He pressed in, her eyes riveted to his cock as it split her wide. The heat of him both quenching her need and making her burn brighter. She felt full, an overwhelming fullness that made her belly bulge. An inkling of something sinister crept up her spine. He leaned forward when he was seated to the root, his breath hot on her face.

“A sacrifice of blood, Sara. A new field to seed. A new harvest to come.”

The words swirled like poison in her brain as he began to move in earnest. Her mind screamed at him to wait, but her mouth issued forth heavy moans of encouragement.

“Yes.” She cried the word as he slammed home over and over, giving her body exactly what it demanded.

His lips captured hers, feeding her fire as his cock took. She arched up into him, driven nearly to the edge from that kiss. What little control she had over her body was slowly slipping out of reach, taking her sanity with it.

“Soon you’ll understand in full what you only know in part.” His eyes glowed bright a long moment, blinding her.

He slid a hand beneath her to tilt her hips and she flew apart. That burning started from her core and rushed through her body, touching every nerve ending. Sara felt consumed by her climax, torn apart from the inside out.

“The beauty of this ecstasy,” he whispered, “is what will be born from it.”

She opened her mouth to vent the intensity of the moment, but no sound came only the bubbling ooze that he’d fed her with his kisses.

That stark terror rose as the feeling of suffocation overwhelmed all else. Her vision grayed around the edges, until only his bright eyes filled the center. He continued to move above her, pushing into her frozen body until her consciousness faded completely.

She woke later in her bed, dizzy and confused. Her heart was beating so fast she thought it would clamor from her chest. There was an ache in her core and dread coiled right beneath her sternum.

A glance at the clock revealed time had moved only five minutes past when she’d planned to follow Tirah out of the house. Maybe she’d fallen asleep instead of going after her sister as planned.

Rising from the bed, the cover slipped down to reveal her naked body. Bruises dotted her thighs, splashes of blood painted the sheets she under her butt.

“My period must have come early.” She clung to that lie.

She made it to the bathroom and gasped at her reflection. Dried blood covered her cheeks and mouth.

The flicker of a hooded figure standing behind her made her scream, but it was gone when she whirled around. The burning ache filled her belly and she trembled.