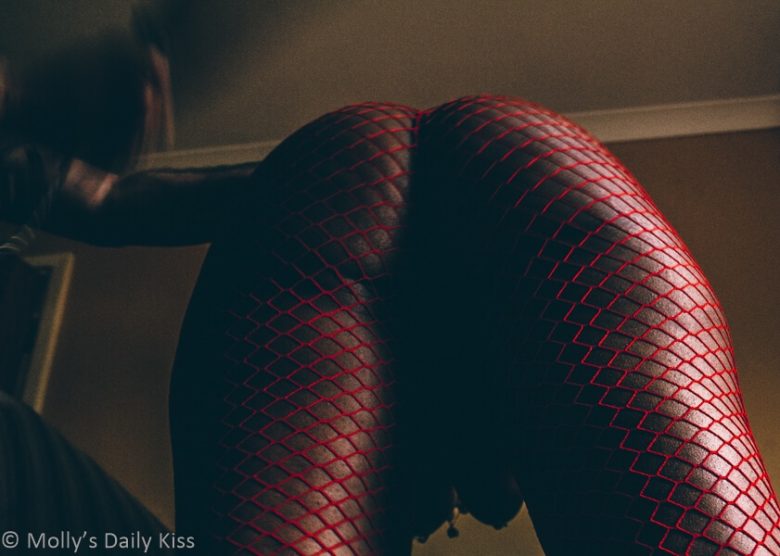 “For fuck sake, are you twelve? Give me back my underwear.”

He moved out of the way when she tried to reach for the tiny red scrape of fabric she claimed was underwear. She made a noise and grasped at them again, her body pressed into his. He kept them enough out of reach that her only choice was touching him.

“Are you sure these are panties? They seem more like a handkerchief to me.”

Bringing the lacy material to his face, he rubbed it against his nose. He could smell her on them. Her cinnamon scent and the enticing scent of cunt that all made his cock hard in his jeans.

She tried to grab them, but he was quick to move them away. “I didn’t mean to drop them in your laundry. If you give them back, I’ll wash them myself.”

Part of him should feel bad for teasing her. She was the best roommate he’d had ever, considerate, kind, cute, and she cleaned up after herself. It was hard not to tease though. Not when she walked around in a thin t-shirt, not when he could make out her nipples through the material, and definitely not when she was pressed against him like this. He wanted to slide his hand up her bare thigh and see if she was wearing any panties now.

“Oh I don’t care to wash them. I’m just not sure I’ll give them back once I do.”

She stepped back and crossed her arms. He shrugged and then brought the gusset of her panties to his nose again. Holding her eyes, he took a deep breath and groaned. He watched, fascinated, as her pupils dilated.

“Yea, I probably am. I do tend to like a lot of nasty things.”

She licked her lips at that. “Those are my favorite pair.”

He tucked the panties in his front pocket and watched her eyes linger on his fly. That tension that seemed to zing between them was electrified right now.

“How badly do you want them back.”

She lifted her eyes and he could just make out the blush staining her cheeks. Her deep breath forced her breasts up, revealing the tight buds of her nipples through her shirt.

His dick was rock hard. Watching the light blush travel down her neck to color her chest made him swallow to wet his dry throat.

“Lift your shirt,” he croaked out.

It was ratty and old, and was the article of clothing she wore that always made him want to rip it off her body. She fingered the hem, gripping and releasing it. He watched her face flicker through a few emotions. Suddenly he realized what a dick he was.

She lifted up her shirt, pulling it off and tossing it on the living room floor. Oh god, she was fucking perfect. Thick thighs, nipped in waist, and breasts that would fit in his palms. She didn’t have on any underwear and she stood rubbing her thighs together in the most enticing way. His mouth watered to taste one of the nipples that had been taunting him for months.

He couldn’t stop his groan.

He couldn’t focus. Every ounce of blood he had had drained down into his dick.

She moved closer to him, her hand settling against his fly. They were chest to chest, eye to eye.

His hand went to her back before sliding down to settle on her gorgeous ass. He squeezed her cheek and grinned when she squeezed back.

“Well, I’ve had a number of things on my mind, but I didn’t want to scare you off.”

She pushed away from him and turned to retreat to the couch. Bending over the arm, she looked over her shoulder as she spread her legs and arched her back. Pink and wet, she slipped a hand down to part her labia so he could see it all.

“I have a feeling I can handle whatever you throw at me. Plus, I want to make sure I earn those panties back.”