Stay in your lane

Or thoughts on the plane. This topic is brought to you by the current voting round for Smut Marathon. “Imperfect” character sketches is the current assignment. It brought up personal responsibility when writing fiction among other things. Here’s just a couple of things on my mind. Go *vote* by the way.

So a few things I’ve been considering lately.

One I offered up as a discussion question on Twitter the day before. It centered around intent and perception. My thought process was in reference to writing. Does intent matter in light of someone’s perception of your writing? If the intention wasn’t harm, but the person receiving your writing was harmed (or felt offended or the subject brought up some hard feelings), does that perception supersede intent?

I tend to avoid topics that bother others. My erotica may have parts that aren’t necessarily everyone’s kink, but I don’t stray too far from what’s usually acceptable for people. Even when I do, my intent is usually to write stories that appeal not offend. I want people to read and be aroused, but that gets tricky if people are leaving in disgust.

So of course the discussion raised some other thoughts. Mostly in reference to a phrase I see tossed around by those who are social justice warriors (not a derogatory term). The idea that people need to stay in their lane.

You read a book about an issue or topic, dislike an aspect of it, check who the writer is, see they aren’t (black/a woman/disabled/trans) and immediately dismiss them. Or go on a tirade about how utterly unsuitable they were to write the book/piece because they have no lived experience to write on such things. Cis/white/male get hated on for this a bit, but someone writing about something they aren’t? You stay in your damn lane.

Many a book boycott has started this way lately.

But… some of that is silly too.

I don’t need to be a serial killer to write novels about serial killers. I’ve written a story or two from the point of view of a man and I got no dick. If you look closely at many of my stories, I either write my characters neutral enough they could be anyone OR they are white. Last time I checked, I am not white. I’m writing what I am/have been surrounded by and know most of my readers are white.

Many stories are about emotions. You can write others correctly without lived experience to go with it. Research, asking questions, interacting, and being mindful and intentional in the writing of those characters that are different than yourself.

To tell people not to write a different type of person because they aren’t that type of person is grossly restrictive. It denies someone the opportunity to learn and make an attempt to understand someone who is not them or like them. It can be done right, well, and with a delicate hand.

It’s okay to navigate outside your lane and do so successfully. It’s also okay to make a point of directing people to those books that are better examples of the group you’re trying to represent in your writing. Be an advocate within your writing, show your research, and (if or when you make a misstep) admit you messed up.

Brigit Delaney (@BrigitWrites) said something spot on worth repeating.

I will not stifle my creativity because it might make someone uncomfortable. I am bound to offend someone at some point. And I am okay with that.

Some things are taboo, but that doesn’t make them off limits. Some things offend and that’s necessary. As *RG mentioned* in her talk at Eroticon, we should go to those places not stay away from them. We should tackle things without fear, but be willing to take the pushback when it comes in order to explore scary subjects.

I’m a chicken, admittedly, but I do want to be braver writing those subjects I’m not necessarily versed in. I do want to measure my understanding against my intent because I can fuck up badly if that’s misplaced. To know when not to write something as much as when to give it a go. I’m not exactly the pillar of “do the right thing”, but I try.

Hopefully, if I’m asked, I can explain my intent and with that conversation learn where I’ve messed up. It’s about making mistakes, learning, and making more connections, right?

I’ll venture out of my lane just a little. 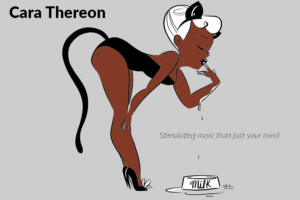