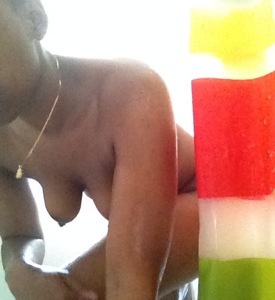 She fucking hated the cold.

The tag of one of the shirts she had on was digging into her side and she was losing her hold on her suitcase because her gloves didn’t give her good purchase. It was freezing and miserable.

She was nearly home. It was her stubbornness that made her walk from the train station instead of calling a cab. Her steady stream of bitching as she trudged down the sidewalk wasn’t keeping her warm, but it was making her walk a bit faster to get out of the cold.

Finally, just as snow was starting to fall in fat flakes around her and she was positive her fingers were going to fall off, she made it up the drive and into the warmth of the house.

“I am not suited for this damn climate.”

“You should’ve called me to pick you up.”

His voice from the living room startled her.

“Damnit, Adam.” She leaned against the door, gloved hand over her heart. “Why do you insist on scaring the shit out of me.”

He simply chuckled. She rolled her eyes and pushed away from the door.

“Seriously, Deb, you should’ve called me to come get you. I know you hate being out in this weather.”

She shed her layers of outer wear as she stood just inside the living room door. “This time of year fucking sucks, but I didn’t want to put you out. It’s literally around the corner.”

When she was finally down to her thermal leggings and a light shirt, she crossed the room and plopped down on the couch beside him.

The chill seemed to have crept beneath her many layers of clothing into her bones. He pulled her closer, well aware of how long it took her to warm up.

When she was inside, the blanket of snow covering the ground was beautiful. She huddled closer to his side, attempting to enjoy the Christmas tree in all its glory and the gorgeous winter wonderland outside the picture window.

Except all her mind could really focus on was how cold she was.

Her teeth chattered a little. She wanted to burrow into him, but couldn’t seem to get close enough to him.

There was a thread of steel in his words and she silenced the argument that was on the tip of her tongue. She peeled herself away from him and just managed not to pout at losing his warmth.

She left her suitcase by the door and climbed the stairs to their room. Now that he’d suggested the idea, it sounded better and better to her.

Shedding her clothes by the doorway, Deb made her way into the bathroom. Her towel was already on the warmer so she just gathered her slippers and robe to put on after.

Steam filled the room, clouding the mirror. She stepped in and immediately gave a happy sigh as the hot water spilled over her. She dipped her head under stream, closing her eyes as the water warmed her from head to toe.

Big hands cupped her breasts, stopping her as she reached for the soap.

“Let me help you finish getting warm, love.” Adam’s voice in her ear made her shiver.

He tweaked her nipples before grabbing the soap. She leaned into him as he soaped up her chest. The way his hands moved over her skin, teasing her nipples until they were painfully erect before sliding down her stomach.

She parted her thighs, needing desperately to feel his fingers on her clit. She whimpered when he bypassed her cunt.

He simply chuckled, holding her hips to stop her from wiggling. “Be still.”

The way he kicked her feet wider and pulled her feet back forced her to plant her hands on the wall for balance. She felt the head of his cock along her lips and then he was thrusting deep, forcing her to her toes.

She was on fire now. The hot water raining down on her as he fucked her steadily from behind, sent her temperature soaring. She could do little except brace and revel in the combined sensations.

He wrapped a hand around her throat and pushed until her front hit the tile. The way he hemmed her in, controlling her with the way his thrusts pinned her place, sent her toppling over the edge with a loud cry.

His thrust sped up, each one so hard her hips bounced on the wall. She’d have bruises from his rough treatment, but in that moment the pain amplified her orgasm tenfold.

Adam came with a roar that seemed to fill the room in much the same way as the steam. She felt his come filling her, warming her from the inside. She shuddered as echoes of her orgasm continued to move through her.

They stayed still beneath the warm spray, both silent and working to catch their breath. She rested her forehead on the wall, replete and loving the drip of water and come down her body.

He reached around her to snap off the tap. The steam billowed in the air above them.

“I’d enjoy winter more if I could always get warm like this.”

“Hm.” He kissed her on the shoulder, his hum rumbling through her. “I’ll have to see what I can do.”