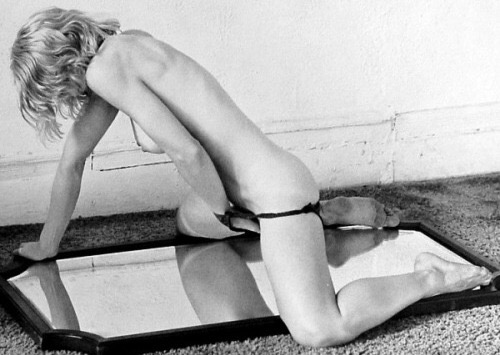 It was a compulsion that led her to stand in front of it.

Her reflection appeared in the mirror, wide brown eyes staring back at her full of questions and an earnest need she saw too often.

He’d called her cold the last time they’d met, a cock-tease because she didn’t like the way he touched her. She just wasn’t comfortable.

It wasn’t just with him though. She wasn’t comfortable in her skin lately. There was this itch just beneath that she couldn’t explain.

But the ache was there. It woke her in the middle of the night. An unexplained heat would fill her and her dreams would team with teasing touches. She’d wake sopping wet between her thighs and her hand would sneak there to cup her… Her pussy.

Her face heated as she even thought the word.

“Stop.” She turned away frustrated with herself.

Holding her breath for a long moment, she pushed away her embarrassment. An idea crept into her head and she let herself follow it instead of allowing it to slip away. Piece by piece she removed her clothing until she stood in front of the mirror with just her panties on.

It took everything she had not to turn away from her reflection and look at just look at herself. The cool air pulled her nipples into hard peaks, the long strands of her hair caressed her breasts and fell down her back. She stepped back so she could take in the curve of her belly, her hips, and her thighs.

Pushing her panties to her thighs, she looked at that secret place. At the dark hair curled there, protecting the entrance to…

“My pussy,” she whispered, her blush only slight this time.

The need to see herself was overwhelming. She’d never looked before and found she needed to.

Stepping back, she let her knees hit the bed and sat. Spreading her legs made her heart race. The image reflected back to her sent heat to the very place she stared at so intently.

Pink; pale like a rose she was on the inside. Lifting careful fingers, she touched that place at the apex of her body. She jolted, gasping at the sensation. Could she feel that every time she touched herself?

She laid back, her fingers touching and exploring along her labia. Wetness leaked from her and she touched it tentatively, surprised at how hot she felt.

Lifting her head, she wanted to see herself splayed out. She made a frustrated sound, her bed too low for a good view in this position. Inspiration struck her and she found herself moving again without much thought.

The mirror came away easily and she placed it on the carpet by her bed. Kneeling, she straddled the frame, leaning forward so she could see the pink of her pussy below. Her fingers dipped down to touch again.

It felt too wonderful. The sensations streaking through her curled her toes and made her breasts tingle. There was no stopping the way her hips danced, no ignoring the wetness dripping down on the mirrors shiny surface, and no denying the way her body grew pinker and plumper beneath her hand.

What began as a flutter deep in her core blossomed into an inferno that ripped through her with brutal suddenness. Keeping her eyes open at that point was impossible so she rode the waves of her pleasure for the first time.

And when she opened her eyes, when she looked into the mirror, she saw herself as sexy. Her pussy open and damp, and her face flushed and satisfied.