A Painting at a Zoo 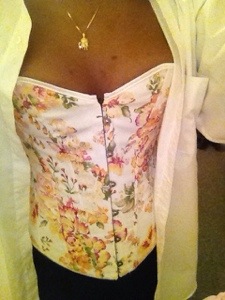 She felt decidedly overdressed. Between the excited children, the faint smell of manure, and the varying decibels of animal screams, Laura felt like a painting at… well, at a zoo, frankly.

The dress bordered on inappropriate in the way it almost plunged too far in the front. It was a summer dress, flirty but formal enough to wear to a nice restaurant. He’d mentioned it was a surprise where they were going, and she’d stupidly thought some place a little less rambunctious.

When Michael had picked her up wearing a pair of jeans and a nice button down, she’d asked if she needed to change. The way his eyes had crawled over her body, hungry and blazing bright, his ‘no’ had been definitive and not open for argument.

Laura felt silly though. Her heels had caught one too many times on the concrete and at least one monkey had reached through the bars to grab her dress. Michael had simply pulled her close, patting her bottom as he led her toward the elephant exhibit.

Some of her irritation smoothed with his arm looped around her waist, diminishing all the more as she enjoyed watching the elephants smash pumpkins.

“See the little one?” Michael pointed.

Laura gave a squeal of joy as the calf chased after a rolling pumpkin, it’s ears flapping and it’s little trunk waving. Michael pulled her into his side right after her tiny dance of excitement. A good thing as she nearly toppled in her heels.

They walked to the exotic animals section and he introduced her to the slow loris. She was embarrassed by how much she mooned over it. The body of a little monkey or a lemur with the hugest eyes and the fluffiest fur coat, the primate inspired more than a few cooing noises from her.

“They can kill you, you know?”

Laura swatted his arm. “Why do you have to ruin the cuteness with stories of death? Let me continue daydreaming about cuddling it.”

“Since you can’t cuddle it, you’ll just have to cuddle me.” Michael waggled his eyebrows at her. “I’ll let you kiss and nuzzle any part you’d like.”

When she rolled her eyes at him, he turned her so he could pull her in for a kiss. She melted into him, letting his arms tighten so they were as close as their clothing would allow.

“Not so bad, huh?” He whispered against her lips. “The zoo can be very fun.”

She was a little breathless, but managed to pull away a bit. “Well, seeing an Ibex scale the side of a wall doesn’t make up for no dinner, but if you buy me some roasted pecans you may get lucky tonight.”

There was a bit of mischief in his eyes as he led her away from the lorises. Laura couldn’t help looking over her shoulder and waving to the big eyed creature, happy when it’s little arms shot up as though waving back.

They meandered through the various exhibits. She could smell the roasted nuts and made to head that way, but he led her a different direction. Well, there went his chances of her flipping up her summer dress for him.

He guided her to the bear exhibit. There was an outside area to view the animals, but he led her inside to where the trainers did their hands on education. It was darker inside and it took a minute for her eyes to adjust. He continued on, pulling her hand so she followed.

The den like area created a tunnel that ended by a panel of windows that gave a view of the bears as they interacted with their trainers. In the center of the room was a table, the top of it loaded with candles and dinnerware. A picnic basket sat by one of chairs and a bottle of champagne was on top of it.

She reached over to hug him, kissing his face. The man always managed to surprise her.

“Dinner for my lady, with a view of the teddy bears.”

He bowed to her and then guided her forward, settling her into a chair. The champagne was opened and poured before he took a seat himself. He was reaching for the basket when she stopped him with a hand on his.

“This is so much better than roasted pecans so you’re definitely getting lucky later.”

Michael’s chuckle thrilled her. “Just wait until you see what I have for us.”

The food he pulled out made her mouth water. Steak, chicken, potatoes, Brussel sprouts, corn, pie, scones… On and on until she was convinced he’d packed a whole store in the basket.

“Definitely getting lucky tonight.” She moaned as she took her first bite of steak. “Sooner rather than later.”