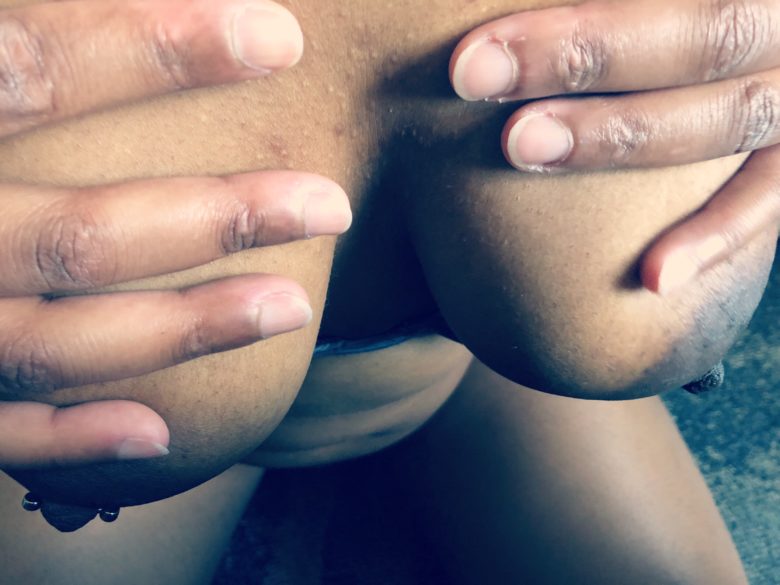 I’ve always been a girl who loved a bit of body modification. I got my first tattoo just after I graduated college. I was 21 at the time and my mother wouldn’t talk to me for 2 days after that. Hard when I still lived with her at the time and raised questions about how much my mother innately sees my body as an hers or an extension of hers.

Even with my mother’s misguided and old fashioned objections, it didn’t stop the desire to adorn my body with art. It was interesting to learn how much I enjoyed the experience of being under the tattoo gun. I’d gotten multiple ear piercings in high school and found I just wanted more and more of those.

My first experience with an intimate piercing was having my nipple done and that was a whole different level for me.

I’d almost fantasized about it beforehand, imagining what it would be like to bare my breasts to someone and ask them to hurt me. It plays a lot on the same feelings I get when I am spanked. There’s a vulnerability there in asking someone to do something that could damage you. I feared it and wanted it in equal parts. It easy to think about being fondled as I’m being pierced and the tension and arousal that permeate the experience.

It was the day before New Year’s Eve when I went. The tattoo parlor is one I’ve returned to regularly for piercings and tattoos. I opted for just having one nipple done as I was worried about keloids, or an overproduction of collagen/scar tissue that can occur in many people. I’d had my cartilage done and got a huge scar from that so my worry wasn’t totally unfounded.

Putting my bra back on after, there was this pulsing ache in my breast that matched the one between my thighs. I was a bit buzzed after and very glad I’d decided to get it done.

I would go on to pierce my labia a number of times after with similar effects, but my nipple piercing was special. It was a sad day when it came out (without me realizing) a few months ago. It felt a bit like a chapter closing. I miss it and occasionally bat around the idea of having it redone. Sadly, I’m one of those people that even after 7 years my piercing gave me problems. It snagged on everything and bothered me during my cycle. It wasn’t easy which is part of why I didn’t just have it repiereced immediately after I’d noticed it had come out. It doesn’t stop me from thinking about it though…

The number of times I watched this and cackled. I never claimed to be a good person, to be fair. 🤷🏾‍♀️ twitter.com/guavajellynews…