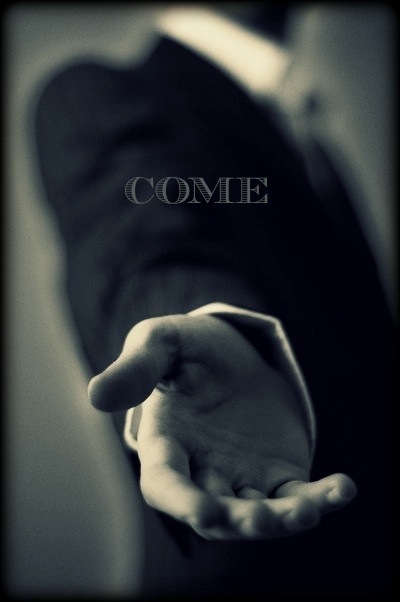 After telling myself repeatedly that I wasn’t going, 6:00 saw me standing in the bathroom pulling on the sluttiest dress I owned. Something black and clinging, too short and too low to be classified as anything other than a “fuck me” dress.

I waited until 6:30 before I left. Partly I’m a bitch, and because I wanted to see if he’d still be there.

Nerves, something I never suffered from, seemed to heighten my senses. The way the silky fabric brushed my skin and swirled around my thighs as I walked thrilled me. My skin broke out in goosebumps as the air moved across my bare shoulders, reminding me of my nudity beneath the dress.

I’m in control of every decision in life, I make them with an assurance that’s it’s always the right choice to me. That didn’t apply with this. I fought myself all the way down the elevator, to the lounge, and even as the waitress led me along even without me telling her who I was looking for.

He was at a corner table, his countenance relaxed, waiting. It surprised me to see him dressed so casually in light slacks and a polo when he stood to pull out my chair. I’d only ever seen him in suits. Some traditional, girly part of me couldn’t help melting just a hair at the chivalrous behavior, and that’s probably why I snapped at him.

He slid into his seat beside me and draped his napkin over his lap. I wanted him to make some kind of remark, but he returned my comment with a wink.

Irritation had me narrowing my eyes at him, but the speedy arrival of the waitress cut off whatever else I intended to say.

“We’ll have the house red. A medium steak with potatoes and green beans for both us as well. The tiramisu for dessert, paired with a dry white. Your selection is good enough so whichever you pick works fine.” He collected both menus and dismissed the waitress with a smile.

If I’d thought I was angry before, I was seeing red at the high-handed way he took over and ordered. Did he think I was some stupid bimbo incapable of ordering? Fucking misogynist idiot.

I drew in a breath prepared to let him know what kind of knuckle dragging Neanderthal I thought he was, but he cut me off with a mind-numbing kiss. He was a conceited bastard, but the way his lips commanded mine scrambled brain. My resistance didn’t stand a chance.

“You look beautiful this evening.” The words were heat on my skin.

I was too muddled to reply with anything other than a breathy thanks. The pleasure on his face at my lapse bothered me, but I couldn’t manifest the usual indignation. What the hell was wrong with me?

I was uncomfortable now. He’d broken through a barrier and I was left feeling exposed. My frenzied thoughts turned to escaping as quickly as I could. Silence stretched for a long moment before his deep voice cut through it.

“I know your type,” he started casually, smiling at the waitress as she poured their wine. “Militant, controlling, forceful, feminist who breaks the balls of any man not strong enough to stand up to your fire-breathing ways. Can’t stand being dependent on a man. You probably had an amazing childhood with loving parents, but one guy probably treated you like shit – either in bed or in front of his friends – and now you think all men are dirt bags.”

My face heated. Too close to the truth, but to hear it laid out so baldly bothered me. I took a deep breath, squashing the need to lash out physically. I wouldn’t be that woman again. A calm washed over me as I met his sparkling blue eyes.

“And you’re a spoiled, rich guy who expects women to fawn over you. You’re used to getting your way and will bully, browbeat, and dominate. You demand everyone bow to your whims no matter how trivial. I bet your mother was a self-absorbed bitch and your father an absentee who brought home the money but never spent time with you. Poor you.” I felt like a huge bitch, but it didn’t stop myself from saying it.

Preston’s eyes clouded for a moment, and I wondered if I scored a direct hit, but it cleared just as quickly. He pressed his hand to his chest and winced. “You could flay skin with that tongue.”

I jumped when he pressed his lips to my ear, his breath hot on my skin. “Maybe if we put that tongue to good use it wouldn’t wound so many people. Something tells me for all your protests you’d love servicing me. I can certainly picture your mouth stretched wide around my cock.”

My breath wheezed out from between my teeth at the image of him standing over me, my tongue teasing the tip of him, his cock buried deep in my mouth, his salty come sliding down my throat. His fingers traced down my arm, just a teasing touch that tightened my nipples in anticipation.

Strong fingers laced with my own as he pulled my hand under the table to his thigh. I gave a tug, but he pressed my palm against the flexing muscle. He inched it up until I felt the outline of his cock against the side of my hand. Big all over…

“Don’t worry, I’d take care of you. Take away some of that control, torment you until you’re begging for it, then fuck you until you’re too exhausted and can’t move.” His breath fanned out along my face, and my eyelids grew heavy. “Then I’d wake you up and spank that perfect ass of yours, make you cry fat tears, and then stuff you full again. Would you like that, princess? My guess is you’re wet just thinking about it.”

How right he was, the arrogant bastard. My lips remained sealed, my stubbornness preventing me from uttering a word. Maybe if I didn’t move, the fact that I wanted everything he promised wouldn’t be so obvious. But the moist heat between my thighs and my shallow breathing gave me away. He was toying with me, I knew it, but I struggled to rouse the venom.

I stared out unseeing, unable to get a grip on my libido. My mind refused to catch up. The arrival of the food helped me pull myself together; bless the waitress’ timing.

Using the excuse of needing to eat, I managed to extract my hand from his grasp. Relief and acute disappointment assailed me, leaving me feeling unsettled. My palm tingled from the contact and I flexed my fingers in my lap hoping to ease the sensation.

His eyes remained glued to my face as we ate in silence. I ignored him and enjoyed the food delighted to find the steak melted on my tongue. A moan of pleasure slipped out of me, and for once I let myself enjoy something, my pleasure visible to everyone.

“Why don’t you let that passion out more often?”

Full, I leaned back in my chair and eyed him nervously. The bland expression on his face didn’t fool me, but I’d relaxed now that I had wine and food in my stomach to calm me. Much more willing to give honesty.

“Why should I? It’ll just be exploited by someone. That’s how it goes when you have breasts; I get treated like a slut and people think they have the right to touch me.” I shrugged, glancing away, uncomfortable with my show of vulnerability.

Preston grasped my chin, forcing me to look into his eyes. The heat burned me, reached deep down and triggered something equally hot that scared me. I tried to look away, but he refused to let me.

“You deserve to know what it’s like to have someone give you pleasure. To have them worship you the right way.”

“And you’re that someone?”

A warm smile spread across his face and my eyes dropped to those full lips. “I know I am. Just let me show you.”

For the first time since I saw him, his arrogance cranked the notch of my desire that much higher. I found myself teetering, aroused and curious, right on the edge of discovering something I didn’t know about myself.

Licking my lips, I tried to reestablish some control over the situation. “But will you hurt me?”

His eyes flared hot. “Only if you want me to, and I have a feeling you want me to.” He swept his thumb across my lower lip and I swallowed hard. “Ah, here comes dessert. Perfect timing.”

“And we all thought you loved yourself”