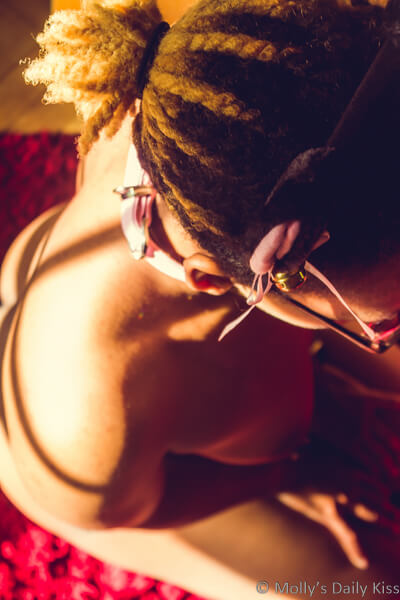 Something I read sparked this. A two parter I’m determined to finish so I can tackle something else I’m trying to write. It’s clunky, but I’m just happy to have the words.

Vidar watched the boy chop wood. No, not a boy, if he was being fair, but a young man. The sinewy muscles on his bare back flexed as he brought the axe down, cleaving the wood in half. Youth still clung to him, a softness in his sweat covered face, a winsomeness that was more beautiful than handsome. The boy paused and glanced up, maybe sensing their hidden presence. He gasped at his striking dark eyes. Large and vulnerable, they pulled at him even from a distance.

He felt something flare to life in his gut watching the young man work. Not just desire, though his cock was shockingly hard. This was a primal need to subjugate and possess. A fleeting image of the boy on his knees, eyes flickering between fear and desire, his mouth full of Vidar’s cock had him straightening up.

He watched for a moment longer, that need solidifying in him. “Slaughter all the men save that one. Bring him to me, unharmed.”

His man nodded and the signal to advance was given.

Pietre tried to make himself smaller, huddling down and rounding his shoulders. He’d been herded up with the women and children, and been left to huddle for warmth as the dying screams echoed around them.

They’d swooped I’m like a black cloud, cutting down every living person in their village. The men, rushing in like a black cloud to pillage and destroy. No one had remained untouched. Pietre hadn’t even had time to react before they’d taken him away. He’d expected to be executed instead of thrown in with the vulnerable.

But that’s what he was; vulnerable. Even though he’d grown and could help some, he still wasn’t as strong as many of the men in the village. Not strong enough to fight or sail or do anything beyond chopping wood and darning. He’d been small and willowy his whole life, the muscles slow to appear even though he neared nineteen.

Now he was unsure if he was glad for his slight frame or fearful. Something had made the men stop short of killing him, and he worried about what about that fact. He worried after his father, his mother, his little sisters. Worry assailed him from every angle, sending tremors through his body as day dragged on into night.

The screams had just died down, but the smell of blood lingered thick on the back of his tongue. Pietre’s belly growled with hunger though he wasn’t sure he could eat even if someone did come to offer them food.

“Why didn’t they kill you?”

He turned to gaze at the woman beside him in the darkened tent. In the gloom, it looked like Gail, the baker’s wife. He could barely make out her face, but felt her desperation. The words were whispered, but felt like a sharp knives to his heart.

The possibilities were few and he hated every option. Either way, he’d end up died.

Her eyes flowed in the dark, full of accusations. His stomach flipped and for a breath he wondered if she’d strike him. She turned away from him and he huddled further into himself as a chill crept in.

The flap of the tent peeled back, and everyone shrank away as light flooded the darkened space. Two soldiers moved in, scanning over the crowed. One’s eyes lit on him and held his gaze for a moment.

“To me.” Pietre jolted as the man’s voice cracked through the silence. “Now.”

“It would be smart to feed them before you fuck them. No children and if I hear of it, you’ll lose more than just your rank.”

Pietre wanted desperately to block his ears. The sounds of clothing tearing and muffled screams reached him even as he was practically dragged away to the town’s only inn. More a tavern that housed those who wandered through before taking a boat off the island.

The inside was dimly lit, a few spare candles guiding his ascent up the stairs. His heart pounded as he was pushed into the largest room in the inn, the door shutting with a soft click that felt like a gunshot.

He looked around, rubbing his chilled arms as he pressed back into the door. A small fire was going in the corner, but it did nothing to dispel the chill. Or the oppressive darkness that seemed to want to swallow him up.

The low voice, silky and deep, cut through the dark. Pietre’s eyes were drawn to the chair that sat just out of the reach of the firelight. He felt a gaze on him that sent fear and heat twisting through his body. Was he being stripped by those eyes or dissected? He didn’t know which he wanted the answer to be.

“You’re trembling so you must be scared.”

He hadn’t realized he was shaking until then. Tremors coursed through his frame. He’d assumed it was just the juttering of his heart, but the quake was far reaching.

“I-“ his voice broke. It took another attempt before words would come. “I’m not sure.”

“You aren’t sure? Perhaps I should help you decide.” The man shifted and then stood so the light brought him into view. Pietre felt the room shrink or maybe it was him cowering.

The man was a towering giant. Even with the distance of the room between them, Pietre knew he’d not reach his shoulders. His face was sharp, long nose, sharp cheekbones, hard jaw. Long dark hair flowed like a curtain down his back and stark white skin that glowed in the light. It was his haunting blue eyes that made Pietre tremble though. They reflected the firelight in an unusual way, like the glimmer of animal eyes. He felt like prey under that stare; small, weak, and ready to be devoured by this beast. His eyes dropped to the floor.

Pietre felt him come closer, that heat from moments ago encompassing him as the man approached. Calloused fingers caressed his cheek, raked through his hair, and then gripped his chin. His eyes were once again lifted to that predator’s gaze.

“My name is Vidar Igonru, the first knight of the Celdion Army. The army that has invaded your little village. You, my little dove, may call me Vidar.” The grip on his chin hardened. “Or Master.”

Pietre knew Vidar’s tone. He’d never touched a woman, but he’d seen enough, thought enough to know what this man wanted from him. The things a man wanted from a woman. Something in the pit of his stomach twisted at what would he’d be made to do.

The hand on his chin left and fell to his shoulder. It was heavy, pushing down so Pietre had no doubt what was required. He knelt, trembling as he glanced up at the man who was sure to devour him.

“Don’t worry, little dove. You were made to do this.”

@Elizjhaynes Good luck to you. I’ve tried to do it every year for the last few years even if I don’t finish. I wish you success.

I don’t have the brain space to do NaNo this year (so I say now), but I love this thread. twitter.com/elizjhaynes/st…

The one damn story I said I’d finish writing, I haven’t yet. You had one job, Cara.