Why do birds suddenly appear?

“Are you one of those girls?”

What a strange question to ask. A weird segue after talking about favorite philosopher.

“What kind of girl?”

He’d messaged her on Bumble and they’d started to have a really good conversation. He seemed to be into a lot of the things she was. Traveling, trying new foods, cuddling friendly dogs.

“You know, like one of those girls who is a size queen? A girl that likes big dicks?” The text was followed by two fingers pinched together with a no and then an eggplant emoji.

She’d been involved in the community for a number of years so she knew what a “size queen” was. There wasn’t a preference in dick size when it came to sex with her. As long as everyone walked away satisfied, big or small was irrelevant. Average worked just as well as anything else.

Him asking, and then explaining, did not make the question less bizarre.

It was easy to see how this conversation was going to go. She’d purposely avoided mentioning sex so early. It was damn near impossible to chat with dudes without it veering that way, and she’d almost believed this guy was going to be different.

Not in the mood to talk on this with a stranger, she made to end the conversation.

A picture of a dick appeared on her screen. Him flaccid, barely peeking out of the top of his jeans.

“Jesus H Christ.” She exited out of the chat and rubbed her temples. “Does this shit actually work on other women?”

After a deep breath, she returned to the chat.

“if I wanted to see your dick, I would’ve asked to. I’m not interested in discussing my preferences with you any longer.”

He shot back a reply too quick. “You’re an ugly bitch anyway. I was just throwing you a bone because no one else would.”

Before he could turn into the abusive asshat she knew he was gearing up to become, she deleted the chat. She debated reporting him, but decided to deactivate her account instead.

This dating business was for the birds.

This week was spotting something on social media and then writing about it. I stumbled upon a conversation where this new Emoji was being discussed. 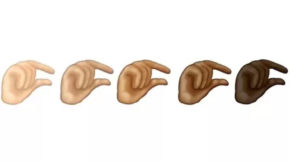