Kink of the Week Wicked Wednesday

We had an agreement in our relationship. Once a week, she picked out his underwear.

It was a reversal of their dynamic. They weren’t in a D/s relationship of any sort, but he usually took the lead. But on Wednesday, she directed him.

She’d wake him at six am, her lips wrapped around his cock. Pulling him from sleep in a way that made him crazy. She never let him come, simply brought him to a painfully erect state before moving away.

“Rise and shine,” she’d sing out, the panties she picked for him dangling from her fingertips. “I have something pretty for my boy.”

Lacy, colorful, and tiny. The make up didn’t matter as much as the excitement in her eyes as she watched him tuck his cock away in whatever scrape of fabric she chose.

Pressing them to his nose, he’d smell her cunt on the crotch of the panties and knew she put them on before giving them to him.

Her fingertips would trace the outline of him through the material, teasing the wet head and then pinching his balls through the gusset.

“You going to be good and keep this nice and hard for me while you’re at work, right? I want to know your cock is straining against your pretty panties all day.”

Then she’d send him to work.

He’d sit at his desk, hard and wanting her. Going through his day wondering if anyone noticed the difference beneath his slacks. His jacket just kept his arousal a secret.

She’d send him photos to entice him, distracting him from his work. A flash of nipple, her wet fingers fresh from her cunt, her lips parted as if to take his cock.

Just when he would settle back down, she’d send another photo that made his cock press into his panties.

“Rub yourself through your slacks.”

“Maybe I’ll push your panties to the side and peg your ass before I let you fuck me.”

It all made him antsy and unfocused. He’d make it to the end of the day with no idea what he got accomplished.

All that bottled up energy followed him home, the lacy fabric torture as he shifted in his seat. She was always there waiting when he arrived.

Wearing nothing but her bare skin, she’d demand he strip down to his underwear the moment he walked in and then tease him through the fabric until he couldn’t take it.

That’s when he took back control. He’d peel off the panties, stuff them in her mouth, and fuck her until they were both exhausted. The slap of their bodies and their cries a beautiful noise that filled the house.

“I love it when you wear my panties,” she’d sigh as he rested against her. 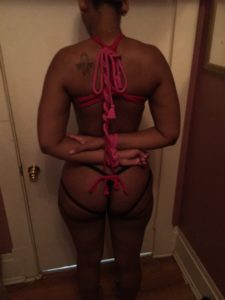 Kink of the Week

About 3 hours ago from Cara Thereon's Twitter via WordPress.com