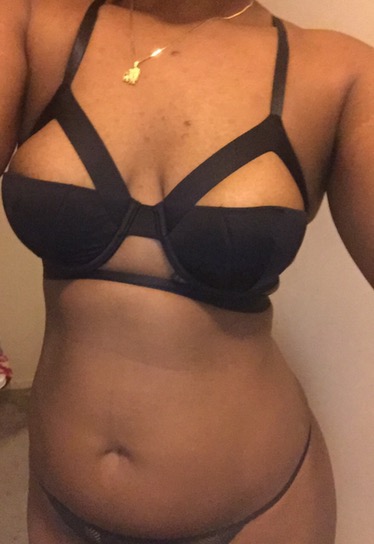 Fullllll disclosure. I’m 33 and prior to meeting DomSigns, I’d never been in a relationship.

Some of that is probably the men I’ve been attracted to not being into me. Timing could have a lot to do with that or where I’ve been geographically for portions of my life. Could be a color issue, could be my personality, could be a lot of reasons why, but the end result is I’ve been single.

I’ve never had a boyfriend so at times it’s a foreign concept to me.

Had to look up the definition of a boyfriend, because… why not? 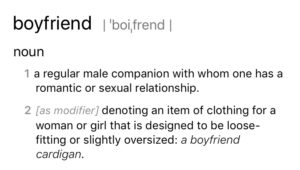 A few months ago, Molly said something about me being DomSigns’ girlfriend. Then my best friend, after I mentioned the relationship, called him my boyfriend. I furrowed my brow both times because it’s so strange to me.

For the longest time, I didn’t believe I was girlfriend material. If you’d have asked me last year this time, I was still doubting my attractiveness to the opposite sex forget having a boyfriend.

Honestly, I’ve just felt too strange, unattractive, and difficult to be anyone’s girlfriend. A boyfriend is someone who wants to be with you forever (or at least longer than a few days or dates) and my experience had been anything but that. I’d come to the conclusion that guys want to fuck me, but not date or be with me long term. It’s enough to give a girl a complex!

I’d believed I’d never have a boyfriend and was approaching the age where the idea of being single for the duration of my life was a sure thing.

But DomSigns is my boyfriend. My best friend will jokingly call him my ManFriend, which I’m not so sure about.

This is new and different for me. I have to change my mindset. This is more than a D/s relationship with DomSigns. It’s more than a Daddy/kitten relationship. This is someone I love and want to be with for as long as he’ll have me.

I was thinking about this last night. A Daddy/kitten relationship is awesome, but it’s easy for me to slip into a role as a simple receiver. He directs and I follow. I’m a little girl and he leads me, calls me sexy, makes me need him, and punishes me when I’m bad.

But this is more obviously.

To love someone and care for them is different. To give to them and build them up. To think about ways to help them grow stronger. That’s something else. When I can be on a Skype call with him and we don’t have to talk and it’s comfortable, I’m pretty sure we’re nearing nirvana.

I’m still trying to feel out being someone’s girlfriend, having a boyfriend and I like that. I never expected to have someone who’s mine in any fashion and it makes me happy. I’m still learning my place in my relationship and that’s important to admit.

So subby, kitten, little and girlfriend.

Love is a good thing. It takes a girl who never thought she’d ever being in a long term relationship, to one with a boyfriend. I definitely didn’t think I’d get here and I’m learning to enjoy it.